As a Pilates professional of more than 25 years, I am sometimes saddened that the mainstream image of Pilates still seems to be that it is a trendy fitness experience that doesn’t net real results. Never mind that professional athletes the world over have integrated Pilates into their training to improve their athleticism; or that rehab professionals everywhere use Pilates to help patients recover from injuries and illness; the old image persists. So this week, I thought I would share one man’s success story with Pilates at Moving Spirit studio.

Bryan Wilson is a 64 year old carpenter and musician. In just over a year, he has transformed his movement and improved his fitness dramatically. Full disclosure: Bryan is my husband. Before you dismiss his words as pure nepotism, I want you to know that he resisted doing Pilates for more than 25 years! As a big strong guy, working a very physical job, he just didn’t imagine that Pilates had anything to offer him. (Remember that prevailing image I talked about? Yeah – my husband had the same idea.) But after a few years of accumulating aches, pains and instability in his body, he decided to take the leap. I asked him if he would share his experience with us in this informal interview. Here it is: Pilates – One Man’s Success Story.

Susannah Steers: Bryan, can you tell people a little about you, and what kind of physical activity is part of your average day?

Bryan Wilson:
I am a carpenter, and I work at a variety of different kinds of job sites, depending on the job we’re working on. The work is very physical. On any given day, I could be lifting a lot of really heavy stuff, rolling around on the floor getting under cabinets, or holding big things over my head to screw them onto a wall. I often have to support weight in really awkward positions. There is a lot of up and down, and sometimes in very confined spaces.

I’m also a musician and a singer. I play both electric and stand-up bass. The stand-up bass requires different posture and support than playing the electric bass. It’s a big instrument! And singing has it’s own technical requirements for breath and support. I play gigs with different bands most weekend nights. People don’t often realize that when you’re playing and singing full out, it’s a workout!

Susannah: What was going on for you that prompted you give Pilates another try?

Bryan: My work pretty hard physically, and my body was really starting to complain. My low back was always sore, and it was getting harder to move easily between sitting or kneeling positions to standing. When I lifted something heavy, I had to constantly stop and brace myself. I was afraid I would injure myself and affect my ability to work. My feet were sore all the time. Whenever I went for a hike, a run or a long walk, I would get a pain down the front of my legs. And after a night playing a gig with my stand-up bass, my shoulders and my back would be stiff and sore.

Susannah: Did you try anything else as a way to deal with this stuff before deciding to give Pilates another shot?

Bryan:
I did the usual guy stuff. I went to the gym and lifted weights. I tried some fitness and exercise videos at home. I went hiking and running.  Some of it felt good in terms of overall fitness,  but my joints still hurt – and there were things I couldn’t do for fear of hurting my back or my shoulders and wrists.

Susannah:  Given that your wife is a long-time Pilates teacher and studio owner, why didn’t you try Pilates earlier?

Bryan:
About 25 years ago, I tried a Pilates mat class downtown. I hurt my neck trying to do some of the exercises.  It was a big class, and it wasn’t really set up to help me with that. There wasn’t really time for the instructor to give me any personal attention. After about 3 classes and a sore neck, I decided Pilates wasn’t for me. 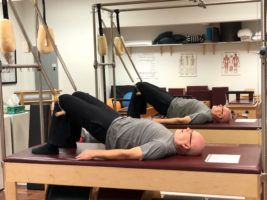 Bryan: At first, I thought I would come to class and just get a few exercises to stretch my muscles out a bit. I figured that it might not completely solve the problem, but it likely wouldn’t hurt. I imagined that when I began working with the machines, it would be much like my previous experiences with exercise, where the whole strategy was to load heavy and push hard. That’s what I was used to. When I first started Pilates, I felt as though the exercises were way too easy, and that the weight loads were too light. I was sure it couldn’t possibly do anything. The weird thing was though, that my body actually felt much better at the end of each class.

Then, after a few weeks or a month – I realized that I was walking differently, and that my back felt looser and more relaxed than it had in a very long time. As I worked out, I could tell that my big strong legs were not as strong as I thought they were. Especially when I realized that the little 90 lb. woman beside me could do things that I couldn’t do!

After about 3 months, I started going to class a couple of times a week. That’s when things really took off. I started to notice a big difference. Suddenly, I had a spring in my step. Moving around in my day took way less effort. I had more energy and a lot less discomfort. I was hooked!

Susannah: Is there anything that surprised you about the results you are seeing?

Bryan: I’ve worked in construction for a long time. I thought I was strong before. I am amazed at how much stronger I am now! My big muscles were already strong, but my deeper muscles needed some work; and those muscles are the foundation of everything. I’m also way more mobile now. One of the young guys at work saw me running up the stairs the other day and commented on it. I guess it surprised me too, because I didn’t even think about it – I just did it. That felt good.

Susannah: How is the Pilates Method different from other things you’ve tried?

Bryan: Pilates is way more specific than anything else I’ve done. It’s not just about big weights. The technique is important. I’ve learned that more is not always better. When I do things in the proper way, I am sometimes surprised to feel sore muscles afterward, even if doing the exercise itself didn’t feel particularly strenuous at the time. I am working different muscles in new ways. My muscles are not as bulky as before; they are longer and leaner. But they are way stronger. And my joints don’t hurt!

Bryan: I can get up and down from the floor or from a chair with ease now. I can move much faster and with more confidence. My balance is better. I used to worry about my back going out when I had to lift heavy things. I’m not concerned about that at all anymore. I don’t have to strategize and brace to prevent injury,  I can just move. I walk differently. My hips are more open & relaxed, my steps are longer and I feel freer. My feet and legs don’t hurt after a long walk, and my shoulders don’t hurt after playing my bass. I’ve even noticed that my breathing is better when I’m singing. I have more energy and it’s fun to move again!

Susannah:  Can you describe your experience in starting the Pilates method? What was it like for you? 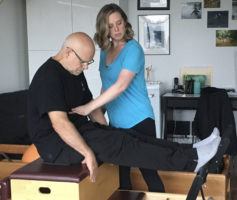 Bryan: I was a little hesitant to start, not sure what class would be like. You set me up right away with my starter program, so I could do the group class. In the group class, each person has their own personalized workout to do. Everyone works on their own stuff, as you or Allison coach them through the work. It can be be social sometimes, and other times people just get down to it. People go in and do what they need to do, at their own pace, and I like that.

To be honest, there were a few things I found frustrating at first. The coordinated movements were unfamiliar, and it took some time to get comfortable with that. I was skeptical at first of the idea that connecting to my core would really help my movement that much. I thought it was a bunch of hooey. Until I actually felt it. Now I understand why it’s important – and I can actually feel when my movement is well supported and stabilized, and when it’s not. I think that’s what probably kept me going – when I was struggling to learn an exercise or not feeling like I was working hard enough – I always felt looser, and more relaxed after class.

There is a learning component to Pilates that I didn’t anticipate. Learning the movement, paying attention to the way my body feels as it moves through things, and knowing I can make adjustments and refinements that make a difference: these things were all new to me in an exercise setting. I can feel the value of that now, and appreciate the way attention to these things makes me feel better.

At first I wanted to “fix” everything all at once. But I realized it was easier to focus on one thing at a time, working a progression toward my overall goal.  It was slow at first. But now, things that were really hard when I started are easy; and I can work toward new challenges. I’m having fun doing new things.

I love that I can come in to the studio on any given day with a specific problem, like a stiff neck or something,  and the staff gives me creative solutions that work for me. When I’ve been going really hard at work, and I notice my shoulders or my back getting stiff –  I now have a whole series of exercises I can do at home to help me feel better. I am doing exercises I never would have thought of doing on my own, but I’m feeling more limber than I did at 40!

Susannah: What would you tell others who might be interested, but may be somewhat skeptical about doing Pilates?

Bryan: If you’re someone with a physical job that takes it’s toll on your body, if you used to play sports but you’re slowing down because your back or your joints are sore – give Pilates a try. It’s not about pumping iron or hanging out with the boys, and it won’t feel like a heavy sweat at first. But your body feels so much better, and your capacity increases in ways that might totally surprise you. It’s not an instant fix. Give it some time, with regular practice, and you’ll be amazed at how good your body can feel.

If you’d like to hear another success story, check out Rosemary is Going To Nationals!