8 Steps to Integrating the Core:
There’s More to It than Muscle!

Over the years “core training”  has come to mean so many different things to so many different people, that it’s hard for anyone to come to a consensus about exactly what to do with the core, and why. Every new exercise trend comes out with new and different ways to train the “core,” often only addressing the abdominal muscles.

The core is not a power generating mechanism. It’s actually a mechanism that organizes the structure for efficient motion. When the spine is “stiffened” relative to load demand, it frees up the limbs for greater motion, endurance, speed and power. Without that stiffening, movement energy is effectively lost in translation, and the result is less ease and range of motion, reduced stamina and less speed and power. So how do we organize this lovely thing called the core for optimum results?

Too often, the approach has been to simply “tighten” the abdominal muscles, or “brace” the torso. And on the surface, perhaps these strategies make sense.  But there is actually no evidence to suggest that simply strengthening individual muscle components of the core will create the kind of stiffening of the spine that we experience as stability. Yes, ability of the muscles to fire is important. But the deep core muscles are endurance muscles, and the way those muscles relate to other structures in movement will determine how stable, or unstable, the spine becomes.

There is an important neurological component in core training that is often missed.  Much of the work involved in creating a stable spine is MOTOR CONTROL training. Not strength training.  In an attempt to take core training beyond the “flex and burn,” and to create true core stability which will provide support, create ease and enhance athleticism, I’d like to introduce a protocol I created to improve CORE INTEGRATION.

1. Breathe
The vertical, piston-like excursion of the respiratory diaphragm and the pelvic floor can be great training in and of itself. A calm, easy breath is a great way to set the nervous system up for a great core training session. 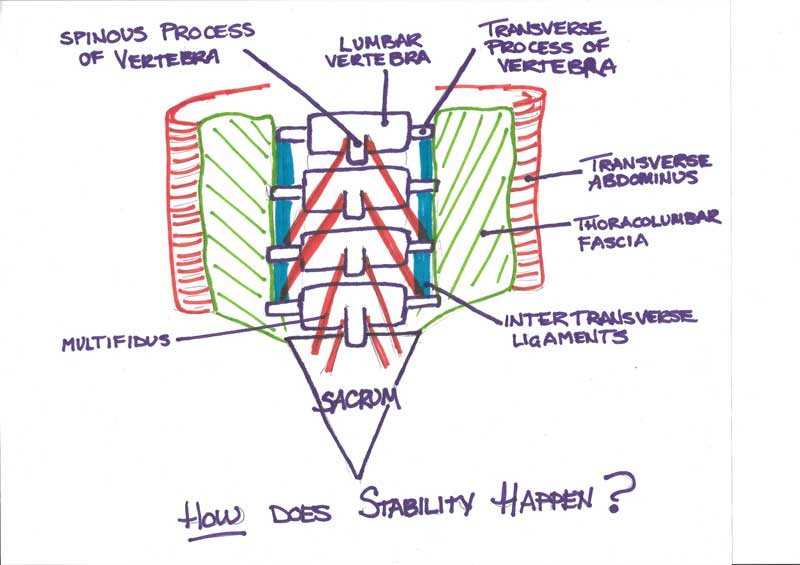 2. Find the Spine/Free the Thorax
A 3-D felt-sense relationship to the spine can do wonders for core stability. Imagine each spinal segment like a cork on a rising tide. Picture length and space rather than shortness and density. Allow the ribs to float on the lungs like driftwood on water, instead of clamping them down and gripping the life out of them. If, as you add load and motion, you can maintain a sense of length and ease through the spine and thorax, you’re likely well on your way to good core stability.

3. Access the Pelvic Floor
In a culture that spends way too much time sitting on our duffs, the pelvic floor sometimes gets a little lost. It gets buried underneath overwork in the butt and inner thighs, and by slouchy posture. Imagine it a little like a trampoline with a bent frame.  Un-kink the “frame” to allow that trampoline to move and rebound well.

4. Release the Hips
Too much tone in and around the hips gets in the way of great core stability, partially because it shifts the position of the pelvic & spinal bones to the point where stress is applied to the soft tissue and discs of the spine. Releasing the inner thighs, hip flexors, rotators and gluteals allows for a neutral position of the thighs in the hip sockets, and makes it easier for the core structures to do their jobs.

5. Connect the Psoas
The psoas, a deep hip flexor, allows the thigh bone to find a deep seat in the hip socket, bringing it closer to the core and allowing for a better transmission of forces through the hip and spine (among other things). Tame some of the more superficial hip flexors, and activate the psoas for more powerful, easy flexion in the hip, and for  better connection to the core in general.

6. Recruit the Transverse Abdominals (Deep abdominal wall)
Connect to the deep layer of the abdominal wall. It ain’t sexy, but, in conjunction with the deep lumbar stabilizers,  it will help you support your spine in whatever movements you take on. It’s not about working this one “harder.” These muscles need capacity and stamina – learn to engage them well in combination with the other structures of the deep core.

7. Breathe
I’ll bet that after you’ve been through the first 6 steps of this protocol, you’ll find your breath comes more easily and more deeply. That’s a sign you’re on the right track. Keep breathing well,  it’s the best, and most consistent core training of all!

8. Move!
Once you’ve established a good connection with your core, and can sustain all the previous 7 steps in a small range of motion, begin to move bigger, with different loads, in different directions. Test your ability to stay connected. You may find you have to concentrate on one or two of these steps in particular. And what you focus on may be different from what your best friend needs to connect.

The trick is to stay present and stay connected. More than likely, you’ll feel the EFFECTS of core stability than the muscular effort of core stability. When you’re getting it right, your motion will feel easier and lighter. You’ll be able to move more weight with less effort.If, as you increase your load demand, you are unable to maintain a sense of length and ease, I would suggest that perhaps you are working beyond what your structure has the ability to support at the moment. Back off on the load for a bit, until you can sustain  length and space in your system – and I guarantee that the result will be a better, more sustainable strength in the long run.

So go – train your core. But train with your brain too. INTEGRATE!!

Moving Spirit Pilates takes a wide, integrated view to core training – emphasizing control, stamina and whole body movement. Ready to give us a try? Check out our “Getting Started Guide.”

Related Post: Core Stability: What is it & How Do I get it?

Susannah, I love the analogy of corks floating. For those of us who don’t have a particularly well-developed awareness of our bodies, that’s a very accessible baby step to take.

I always find that imagery is a great way “in” to the body. I’m so glad this image works for you!

Hmmm … baby steps for me seems like a good idea.

Hi Cindy – baby steps is the only way to go! Start with what feels accessible, and as that starts to make more sense and feel better in your body, then you can progress to new stuff. Most importantly – enjoy the journey! 🙂

Thanks Kelley. Breath is so often forgotten in core training, when really it’s one of the most important components! And if you’re breathing really well – then you’re working with a constant partner in maintaining good core stability!

This is a wonderfully informative article. Thanks for sharing with someone who is oblivious of the body!

I’m glad it resonated with you Lilia. I’ll bet that you might be surprised by how NOT “oblivious” of the body you really are. It’s really all about what we pay attention to. Enjoy!

You are so awesome! I love your articles 🙂 I learn so much and always can apply it to my singing. Love that!

Thanks Tricia! I believe that the whole point of “fitness” training and “conditioning” is preparing the body to support you in whatever your life brings you, so you can do whatever it is you love to do most. I’m really happy to hear that you’re finding it useful for your singing! 🙂