Breath, the Psoas & the Thoracolumbar Spine

Breath, the Psoas & the Thoracolumbar Spine

Breath. We take it for granted. We breathe in, we breath out. We don’t have to think about it, it just happens. And yet, breath is the one thing that ties into everything we do. Breath supports posture and acts as the bedrock for the foundation of every system in the body. It unites the sympathetic and parasympathetic nervous systems. It connects spirit to form. Breath is a foundation, a springboard to physical fitness. Perhaps breath deserves a little time and attention after all.. 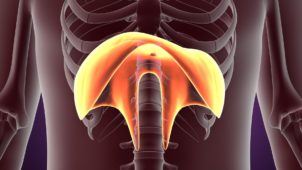 To understand breath, let’s start with a little anatomy.  The diaphragm is the primary respiratory muscle. It is a dome-shaped muscle which attaches to the inner surfaces of the sternum (breast bone), mid-spine and lower ribs (all the way around). These muscle fibres insert on their own central tendon. There is an important and often overlooked “crural” portion of this muscle which arises from the front and sides of the first, second and third lumbar vertebrae, and attaches on the central tendon as well. If the main body of the diaphragm is shaped like a parachute, then the crural portion is the ripcord. (When you pull the ripcord on a parachute, the parachute opens. In a similar fashion, when the crura pull down, the body of the diaphragm flattens and widens.)

It is also important to note that through the crura, the diaphragm has fascial continuity with the psoas major (a deep hip flexor),  and the quadratus lumborum (an extensor of the spine). By the nature of its insertion point on the 12th ribs, the quadratus lumborum acts as an accessory to breathing by anchoring the last ribs, and consequently, the posterior fibres of the diaphragm. The fascial continuity with the psoas continues on into the pelvic floor and beyond.

What creates breath? On a purely biomechanical level, the brain registers elevated levels of carbon dioxide in the blood, triggering the reflex to breathe. The muscular fibres of the crura and the diaphragm draw the dome downward on inhalation. As the dome contracts and descends, the lungs are filled, and pressure is placed on the abdominal organs, causing them to puff forward of the abdominal wall, and downward into the pelvic floor. When the deep abominal wall is toned and resists this puffing, the lower ribs expand and radiate laterally, creating what is often called “breathing into the back” or “bucket-handling” of the ribs.

ching breath, much emphasis is placed on this bucket-handling of the ribs. This articulation of the ribs on the spine is crucial for decompressing the vertebrae. What is often neglected, however, is the movement of the crura along the front of the spine – the active descent of the diaphragm prior to the laterocostal movement. This descent creates a grounding for the breath. If too much emphasis is placed on the lateral movement of the breath before the diaphragm has made its fullest vertical excursion, then the upper accessory muscles come into play too early, creating inefficiencies, and in my opinion, hypertonicity in the diaphragm itself.

When good vertical movement of the diaphragm occurs, the fascial continuations into the psoas and the quadratus lumborum take on a more important role. When the deep abdominal wall is strong, and the pelvic floor is responsive, then the breath can travel down along the front of the spine creating an integrating and stabilizing effect through the thoracolumbar junction and upper lumbar region.

Lying supine, with knees bent and feet flat on the floor, imprint the spine into the floor in an easy neutral position.

Inhale: Draw the breath into the body along the front of the spine. Visualize the long fibres of the crura insinuating themselves into the upper fibres of the psoas major.  Feel the bucket-handling of the ribs.

Exhale: Feel the lower crural portion of the diaphragm drawing the top fibres of the psoas major up the front of the spine as the diaphragm relaxes. Relax the ribs, gently engaging the deep abdominal wall to gently assist the expulsion of air from the lungs. Feel the pelvic floor rise gently inside as you do this.

Try the same thing in a sitting position. What do you notice?

Many people will experience a feeling of length and opening through the thoracolumbar spine, and a widening through the low back. As well, people notice enough decompression the the vertebrae to significantly increase range of motion in rotational movement. In movements requiring flexion or extension, the diaphragm/psoas/quadratus lumborum connection provides a measure of stability, and facilitates clear segmental movement through the thoracolumbar portion of the spine.

Consider the implications of these connections in support of standing positions, and particularly in gait. The psoas and quadratus lumborum are critical in support of the trunk on the pelvis, and in the transfer of weight through the spine to the legs. In my experience, breath where the diaphragm has a good vertical excursion allows for clearer connection to the upper attachments of the psoas and the quadratus lumborum, as well as a sense of width to the multifidus. The legs can hang more easily from the spine & hips, and the quadratus lumborum can maintain its length in walking and running. (A nice relationship to the upper spine via the anterior longitudinal ligament, and the longus colli can also develop, supporting a lovely “head float” – but that’s a conversation for another time…)

The thoracolumbar junction is the point at which the top and bottom halves of the body are integrated along the spine. The sympathetic (fight or flight) and parasympathetic (rest and digest) nervous systems are linked here. Breath connects to gain, spirit connects to form. Through clear intention into the breath, one can release bracing of ribs, spine and pelvis – facilitating a flow of energy to sustain vertical with little effort. The body and mind become better able to respond to the world around them.

So – take a few minutes to explore your breath. Feel its depth, its width, its length. It is a three-dimensional movement in the body which can help you do everything else you do with greater ease. Relax your skeleton, and breathe!

Are you a fitness trainer, pilates or yoga teacher, conditioning coach, movement therapist? If you are, and you’d like more tools and imagery to support your clients’ best breath patterning, check out Moving Spirit’s Education programs, and have a look at our videos on YouTube!

I would like to just add, that “breath work”, since Wilhelm Reich’s groundbreaking research in the early to mid 20th century, has also become one of the most effective doorways and strategies to emotional and psychotherapeutic healing. Stan Grof’s Holotropic Breathwork, Orr’s Re-Birthing, Fritz Perls’ gestalt techniques with breath, Bio-Energetics, all ‘offspring’ of Reich’s work, plus various other more contemporary offshoots, play a key role in the therapeutic field. The beauty of approaching breath anatomically the way you do, is that the benefit to be gained can be emotional and psychological as well as physcial. However, this also implies that the practitioner should be aware of more than just the physical aspect, when working with clients, and allow for relevant and appropriate support when emotions and energy blocks emerge out of this work. Best of luck in your important work! ps when in doubt, breath out. 🙂